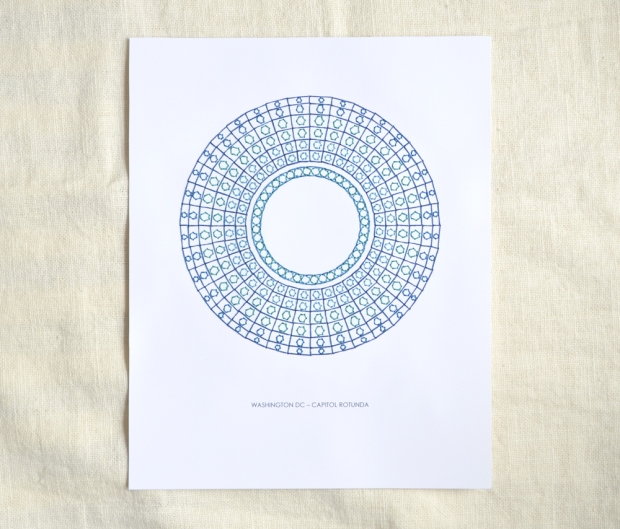 Saving the best for last in this five-part series! I present the rotunda of the Capitol in Washington DC!

So the painting in the center was just not going to happen, but given how busy the rest of the ceiling is, I thought the center would provide some nice white space to balance things out.

This embroidery took me the longest to complete, by far. I thought I would never finish punching and sewing those little hexagons.

I also changed up the hues of blue for a gradient feel, to add some interest. 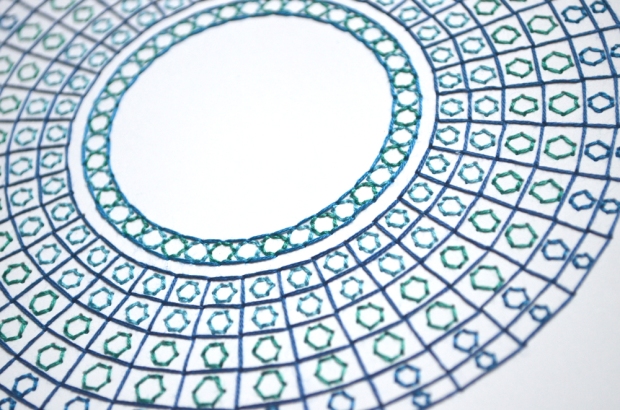 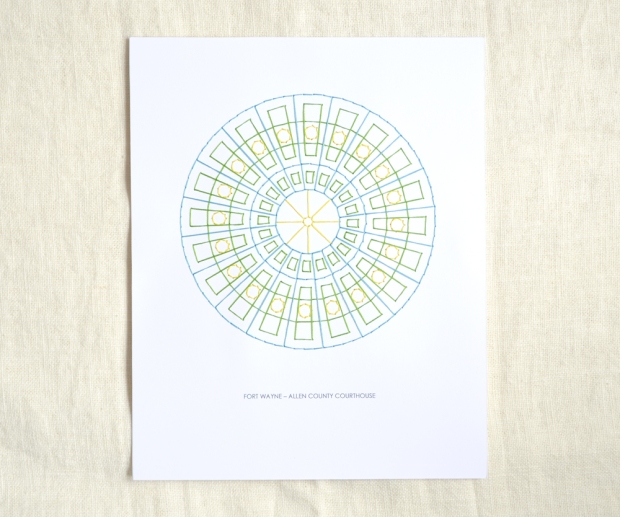 The fourth ceiling to be featured in this series of five is the stained glass ceiling of the rotunda of the Allen County Courthouse in Fort Wayne, IN.

I really love the criss-crossing in the center circle panels, but unfortunately I couldn’t figure out how to make it work with the scale I was working in (8″ x 10″ cardstock). The holes would have been so close together that I wouldn’t have been able to make separate stitches. 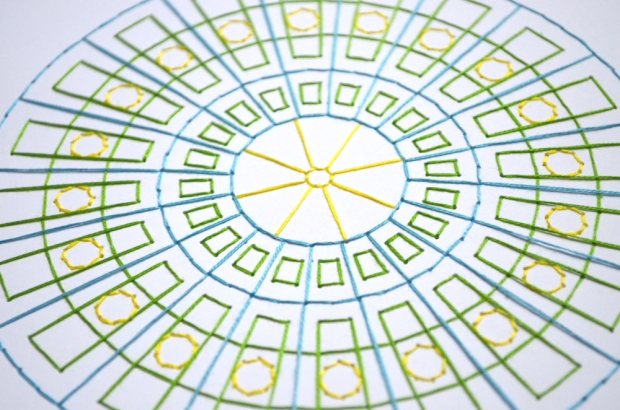 Another fun fact –this location was the spark that spawned the idea for the series. I was racking my brain (and Google) for something unique to identify Fort Wayne that could be represented in embroidery.

When I found images of the courthouse ceiling, I thought about the Palace of Fine Arts in San Francisco… 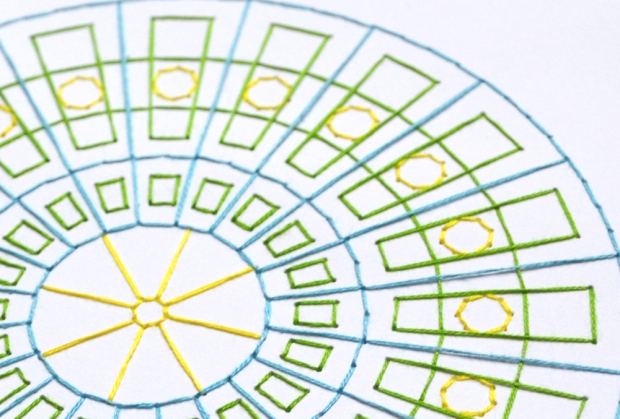 and then I thought of the rotunda at the Capitol …which leads me to the grand finale, number five of five!

Presenting a tutorial for one embroidered Valentine heart! Complete with template downloads and step-by-step directions. Check it out after the jump.

END_OF_DOCUMENT_TOKEN_TO_BE_REPLACED

Embroidery number three in this series of five features the stained glass of the Grand Army of the Republic dome at the Chicago Cultural Center.

This design had to be rather substantially simplified since the original is so incredibly ornate. 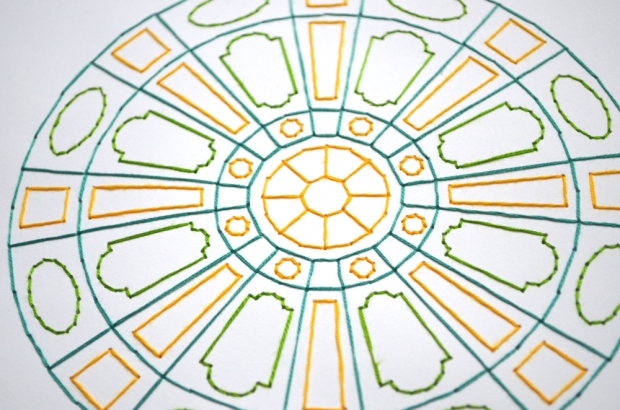 The gold, green and blue thread are a bit of a hat tip to the original stained glass. 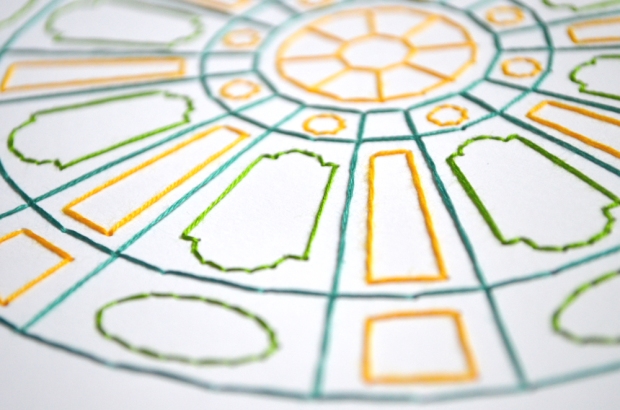 The next embroidery in the series of five is my best representation of the ceiling of the capitol rotunda in Sacramento.

As you can see, I took a few more liberties with this representation in order to make it work in the medium. 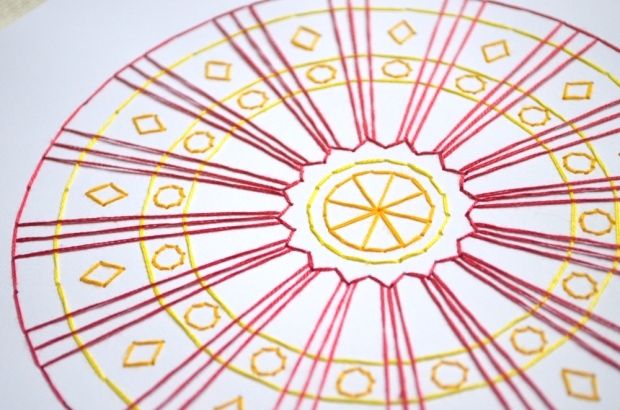 I also stuck with a warmer color palate to reflect the sunny warm climate in the Central Valley.

Quite awhile back a friend requested a series of embroidery representing five locations around the US. I hadn’t done much custom work, so it took me quite awhile to come up with a concept and execute it. For each of the locations requested I found architectural landmarks, specifically buildings with large round ornate ceilings.

Rather than trying to cram all the different images in one post, I will be breaking them into separate posts. The first is the Palace of Fine Arts, representing San Francisco. Most people probably overlook it, but under the dome of the main building is a pattern on the ceiling:

With some modifications I did my best to represent it in embroidery. This is the result:

Overall I tried to use bright and cheerful colors from a limited palate for the entire series of five. This way there would be more cohesiveness across the works. In addition, matching the colors to the actual ceilings would have been either ridiculously difficult or rather boring (eg the reddish brown of the Palace of Fine Arts). 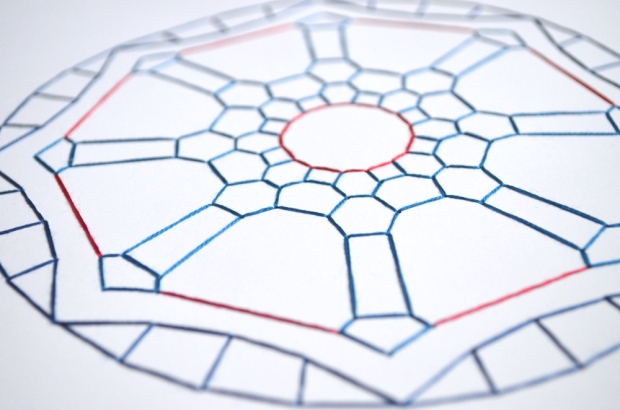 I have a friend who studied tarsiers in Indonesia on a Fulbright scholarship. She recently celebrated her birthday in New York, so I thought I would attempt a tarsier notebook as a gift for her.

I drew over this image in illustrator and then transferred the lines to embroidery on a sketchbook cover. This is the result:

I went with bright colors since I thought brown/black would get boring, though he does have a bit of an acid trip feel to him. The giant eyes aren’t helping 😛

I doubt there’s much demand for tarsier notebooks so I don’t plan on adding them to the shop, but I think my friend enjoyed something a bit more customized for her day.

I’m afraid I’m a bit behind on this post since Christmas is over, but our tree is still up so I thought I would share anyway. I wanted to make a handmade ornament to commemorate the baby’s first Christmas.

On one side I embroidered a snowflake, using a pattern I found online here.

On the other side I embroidered the baby’s name and the year using this font. I finished the ornament by sewing up the edges, adding a loop and stuffing the interior. In the stuffing I included a tiny lock of hair from his first haircut (more like trim) as a sentimental/old-fashioned/creepy tribute.

It’s a great little ornament on our tree that we can look forward to hanging each year.

So coming up this September (or so) I will be MIA for a bit, and the shop will be closed temporarily while I’m on maternity leave! In preparation for the baby I’ve been working on a few handmade items. I found this fantastic tutorial, complete with patterns, on how to make a felt hot air balloon mobile. I’m not much of a sewer, but since this didn’t require a machine I thought it would be worth a try.

The setting is not so great since it’s currently hanging in the living room where I assembled it, but it will be going into our bedroom and then the nursery as the baby grows.

I made a few changes from the original tutorial. First, instead of a large embroidery hoop. I created a frame using sticks of craft wood from Michael’s that I nailed and glued together, and then added screw eyes to suspend the balloons/clouds since I had them leftover from the craft show card display.

For the patterns on the balloons, I followed a couple of the ideas from the tutorial and tried a few of my own.

Another change I made was that instead of using cork for the balloon baskets, I made tiny little felt baskets and suspended them from the balloons with embroidery floss.

I’m happy with how it turned out, and hopefully the baby will enjoy it too.

I’ve finally finished photographing my last few items that I created for the holiday season and posted them in the shop.

I thought these would make a nice stocking stuffer for all the bike lovers out there. I also thought that since I’ll be selling in Brooklyn bikes had a good chance of selling well.

I thought calendars would be a great option for the shop, but it turned out to be a bigger project than I anticipated. I designed and printed out each of the months, and then went and hand embroidered each design on the top half of the card. However, what I didn’t think through was that each image is the time equivalent of a card (more actually) and so I won’t be able to make many of these. I have an initial version that didn’t work out color-wise that my sister has already laid claim to!

This is a product I’ve been working out the kinks on for awhile. I wanted to create a kit so that anyone could make their own embroidered project without the headache of lining up and punching out your design. 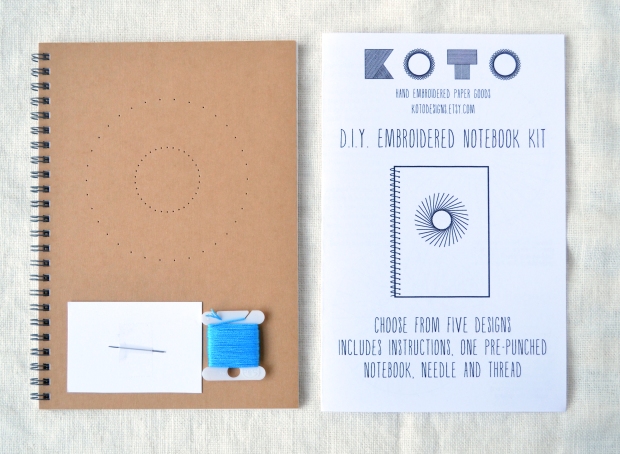 I settled on a design of two concentric circles and included instructions so that people would have some flexibility to be creative with the designs. I felt that some degree of customization was important since part of the fun of D.I.Y. is putting your own personal touch on the item.

So that is the very last of my new products for the holiday season. I have a couple of things that I don’t plan on listing on Etsy, that I’m holding back specially for the Holiday Handmade Cavalcade. We’ll see if I get a chance to photograph them!